Learn the Latest on #Coronavirus and How It's Impacting the Industry
By Charles Gagne | Neil S. Mattson | Renyuan Mi|September 9, 2020 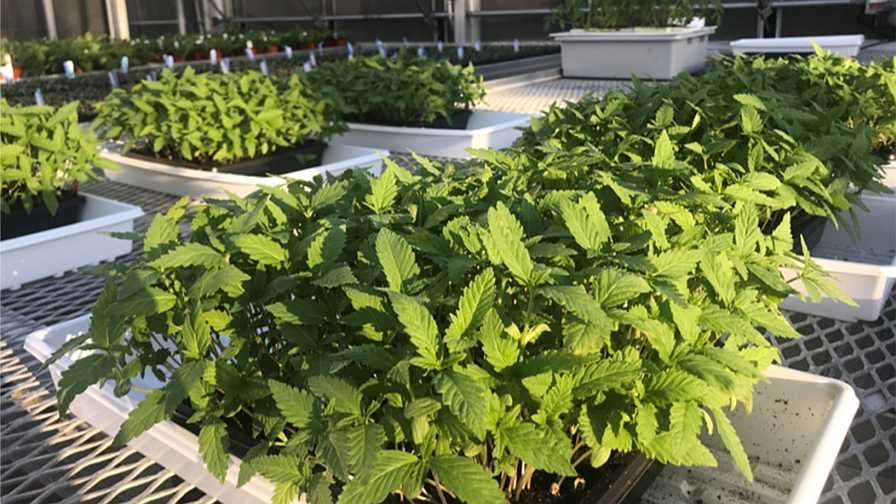 The passing of the 2018 Farm Bill, and with it the reclassification of industrial hemp to an agricultural commodity, has sparked an enormous amount of interest in the production and research into the many uses of the hemp plant. While much is known about hemp’s more traditional uses — such as grain, fiber, and oil — research at Cornell University has begun to uncover another promising use as a high-value, niche, baby-leaf green. Over the past two years, a series of experiments led by Master’s student Renyuan Mi has sought to understand the production requirements and sensory qualities of this novel baby-leaf green.

Based on observed commercial practices, the hemp was grown in flats with potting mix. It was sown into a coco coir/peat moss substrate (about 2 inches deep) and then covered with approximately 3/8 inch of substrate (preliminary research found that this top layer dramatically increased the germination rate). Plants were harvested at the third true leaf emergence, which was approximately 13 to 18 days after sowing. At this stage, the stems are not overly fibrous and the leaves are tender. Plants were fertigated using subirrigation with a 21-5-20 water-soluble fertilizer applied at 150 ppm nitrogen (N). It was noted that hemp seeds seemed very sensitive to overly saturated substrate, so it is recommended to use a substrate with good drainage and avoid excess irrigation.

The first experiment was a cultivar selection trial utilizing nine field (grain/fiber) cultivars: ‘Anka’, ‘Katani’, ‘X-59’, ‘Wojko’, ‘Ferimon’, ‘USO-31’, ‘Canda’, ‘Joey’, and ‘Picolo’. 1,550 seeds were sown per standard 10 x 20 inch flat. This experiment found that the largest difference between the cultivars was the germination rate, which ranged from 51% to 81%. Germination rate also correlated closely to harvestable fresh weight. Of the nine cultivars trialed, the cultivars ‘Picolo’ and ‘X-59’ had the highest germination rate and consequently had the highest fresh weight per area. In general, selection of clean field hemp seed lots with good germination potential will lead to good yields.

In the second experiment, two of the nine cultivars were seeded at five different sowing densities (840; 1,550; 2,260; 2,970; or 3,675 per flat). The results showed there was a significant increase in fresh and dry weight per area as the density increased. However, the increasing fresh weight response began to plateau at the two highest densities. Based on these findings, a sowing density of 2,970 to 3,675 seeds per flat is recommended for highest yields. However, at the highest density, plants were more susceptible to disease (damping off and botrytis gray mold).

The third experiment was conducted to determine the effect of seed size on yield. Traditionally, greenhouse seeds will undergo quality control by the supplier. However, because baby-leaf hemp is not a standard greenhouse crop, bulk field seed lots were used. Seeds were sorted into seven size categories using sieves:

This experiment found that increasing seed size had a positive effect on fresh weight. It was also found that smaller seed sizes had a higher frequency of abnormal/stunted seedlings. This led to a recommendation that seeds with size <7.5 should be removed for best results. 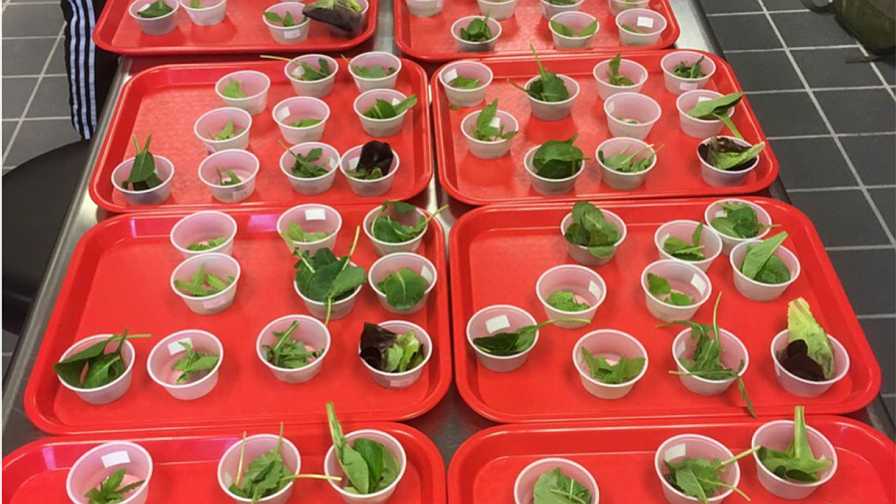 Prior to our experiments, there was not any information on the flavor/texture or consumer attitudes toward baby-leaf hemp. The final aspect of this research project was the creation of a detailed sensory analysis of baby-leaf hemp. To do this, 14 panelists were given samples from six baby-leaf species (hemp, kale, romaine lettuce, butter lettuce, spinach, and arugula) and were asked to describe the taste, texture, aftertaste, and appearance of each. Baby leaf hemp was found to have a relatively mild taste, with unique fruity and floral flavors, and a soft, slightly fuzzy texture. The texture of baby-leaf hemp was found to be quite different than the other baby-leaf greens which, along with its unique flavor profile, makes baby-leaf hemp a great addition to salad blends.

This research has achieved its goal of creating production guidelines and a detailed sensory analysis of baby-leaf hemp, but it has also underlined the need for additional research, breeding, cultivar selection, and cultural management techniques. The research team at Cornell is excited to share its findings and hopes that its work has highlighted the value of this novel baby-leaf green.

Editor’s Note: This article is the first in a series of articles featuring research from students in Cornell University’s Controlled-Environment Agriculture (CEA) program.

Neil Mattson is an Associate Professor and Extension Specialist within the School of Integrative Plant Science at Cornell University.  See all author stories here.

Want Your Greenhouse Operation to Beat the COVID-19 Challenge? Follow These Examples

How a Natural Fungus Can Boost Plant Growth

How Lighting Can Influence Cannabis Potency